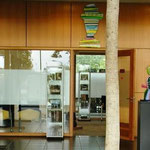 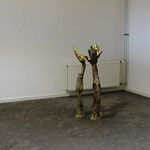 (Roadtrip or something about the space)

“It's pretty good stuff if I do say so myself.” (Craig Roper)

Craig Roper is an artist with a rather raw and reckless style. His works do not usually follow a specific theme nor do they originate from a specific plan or methodology.

“My Western Landscape” groups together some of Craig Roper’s paintings and photo-bundles around his series of silver prints “From a Truck”. This series features photographs of the Nebraska landscape that were taken while driving a pick-up truck, and attempts to go beyond a mere depiction of the landscape to the story that lies underneath it.

This young Belgian photographer has produced an impressive range of photographs, taken moments after the earthquake in Haïti. It was also in Haïti, more specific, in the slums of Port-au-Prince, where she took the photo of the 12 year old girl Landa that won the UNICEF photo of the year competition 2008. At that time, Alice was only 21 years old, thereby becoming the youngest photographer ever to receive this award.

Marie van Vollenhoven often feels like a landscape painter. Not only when the characters she paints are located in a turbulent, intensely present nature. She also experiences the many other worlds that exist somewhere around her as ‘scapes’. Some of them are nearby, like a bar table, a ‘city duck’ that stuffs itself with cold fries, or a peaceful meadow, but other farther simultaneously existing worlds are always noticeable and tangible in her work. A matchbox is just as present as the hurricane that destroys an island on the other side of the world. A fish in the ocean, or an odd character out on the street: cityscape and landscape are coincident and equal to her. Everything is connected. We know and perceive so much at the same time; it’s impossible to understand it all from just one perspective. Marie’s drawings and paintings are in a sense timescapes. She displays the essence of our time: coincidence, complexity and the manifold perspective, the simultaneous awareness of our surroundings.

This also makes Marie van Vollenhoven’s work an escape: even though it depicts our present-day world, at the same time it tries to offer a way out of it.